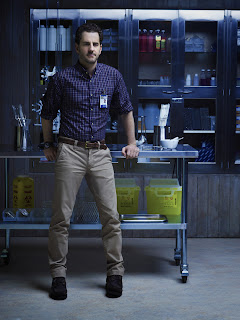 Wetpaint Entertainment: How is the series different than the movies or novels?
Aaron Abrams: It takes place before the movies, so Hannibal isn't locked up yet... He's practicing psychology. He's having parties and going to operas. The only people who know what he is — and what he's capable of — is the audience ... That's a different way to make things charged with suspense and doom.

Bryan Fuller has described Season 1 as the bromance between Will and Hannibal and Season 2 as the breakup. What else can you tell us about the trajectory of the story?
Will Graham, [is] this amazing criminal profiler, but he's so empathetic that he can put himself in the shoes of a serial killer, but that makes him mentally and emotionally fragile. So they get Dr. Hannibal Lecter as his handler — to be his psychologist and help him through this ... They relate to each other in a lot of ways. They become very close in a brotherly way. We get this extremely intricate, intimate relationship between the two of them at the center of this show, which is filled with secrets, manipulation... But also just that, there's heart at the heart of it.

What are your character's strengths and weaknesses?
He's obviously super-smart and super-driven. That's both a strength and a weakness. He can attack the evidence and make some conclusions based on the evidence. [Brian and Will] butt heads a lot. He can put himself in the mind of the character, whereas Brian's just looking at evidence ... We often come to different conclusions.
What are your favorite scenes to play?
Certainly it's fun to be pretty belligerent with people. Brian is smart and he can back it up, so if you disagree with him, he will take issue with that. And it will be fun because he has all sorts of facts at his fingertips to back up his argument. And it's fun to be argumentative — especially when you're acting opposite people like Hugh Dancy and Laurence Fishburne. I don't know if you've ever tried get an argument in with a powerhouse like Laurence Fishburne, but it's pretty exhilarating when he wants to square up and yell back at you. It's sort of like looking at a dragon in the eye. It gets all your adrenaline up.

Does the grim content of the show affect the mood on set?
It's hard because everything looks so real. You always try to arrive to set a little bit early to see if you can used to what you're looking at, especially when it's an actor that's been on the show, and they've recreated his dead body, but his organs are all strewn everywhere. But it looks like a guy you had lunch with yesterday. It can take a while to adjust to that. With my character, I have to put my hands inside his dead body and move around and pull out evidence from inside of him. All that can be pretty visceral the first couple times you do it.
POSTED BY Damian T. Gordon .....AT 5:50 PM