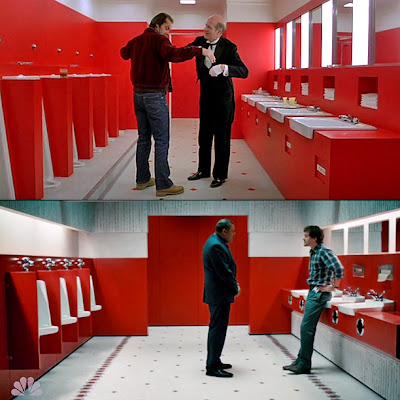 ENTERTAINMENT WEEKLY: When you first saw The Shining did it leave a big impression?

Fuller: It left a huge impression. As a child growing up in the Pacific Northwest who felt isolated, to see the isolation [in The Shining] and what that does to a person’s mental state, was fascinating … I was the youngest of five, so the idea of being separated from everybody and being driven mad by your own devices seemed like a vacation [laughter]. What struck me the most is [the film is] so visually distinctive. Everything about it is about the psychology of the frame… It was psychological storytelling as well as cinematic storytelling. … I know Stephen King would probably kick me in the teeth with his boot heel for saying this, but the movie had a greater impact on me as a storyteller. I still love the book and was a Stephen King obsessive. But there was something about the simplicity and elegance of the storytelling in the film. It was almost like a purer version of the story. I always associated The Shining as a Christmas movie. Because of the winter wonderland and the red and white. While everybody was doing the family thing, I hid in the basement and watched movies by myself.

Why put The Shining homages in Hannibal?
Fuller: I’ve been wanting to do the bathroom [set] forever. I tried to do it several times on Pushing Daisies but we always had budget restrictions and I wanted it to be exactly like that bathroom. Every show I’ve done I wanted to build a bathroom that looked like that space. What’s so remarkable about it is it’s a purely psychological space. You were inside this secret corner of Jack Torrance’s mind where the ghost of Overlook’s past has cornered him and is having a conversation about killing his family. It’s almost like a fantasy bathroom that actually doesn’t exist in reality because it’s anachronistic to the rest of the ballroom — it’s such a stark juxtaposition to everything else that we’re seeing at the hotel. It’s like they dipped the entire set in blood. Like it’s some symbolic weapon that hadn’t entirely penetrated the victim. That impressed me the most and had the biggest impression on me. I understood watching it as a 10 year old that this was psychological storytelling. He wasn’t concerned what was real or what was not real.

There’s a Kubrickian vibe in general in the show too — the sound design, the symmetry of the shots, the long-held beats. Was that intentional?

Fuller: Absolutely. [Director] David Slade and I had long conversations about the Kubrick-ian feel of this show. We are telling the story of a man who makes his living with his imagination who slowly loses his mind over the course of the season. We are telling a version of [The Shining], except the guy is not an alcoholic.

In general, what fascinates you most about Kubrick?

Fuller: It’s the simplicity of his filmmaking that allows the camera to tell the story. The camera is doing as much as the actors in order to convey emotion. I’ve always appreciated the symmetry [of his shots], it’s very pleasing to the eye. There’s something so direct and storybook about the way he presents images to his audiences. They’re unfettered by complicated camera moves. The moves of his camera are graceful and have their own unique rhythm. The beauty and symmetry of the images always keep the audience in a point of view where you’re sitting up straight and looking directly down the barrel of the story. It’s very enveloping. When I see a Kubrick film I feel I am cocooned in his story.

There’s The Shining documentary coming out, Room 237 (our review here). Aside from the bathroom scene, do you subscribe to any of The Shining conspiracy theories?

Fuller: I have not seen the documentary yet. I’ve read several stories about them. I think it’s fascinating to be able to forensically deconstruct Stanley Kubrick’s world and figure out where he was in his life based on the images he presents in his movies. I see it less as a conspiracy and more of a gateway into his state of mind.
POSTED BY Damian T. Gordon .....AT 5:55 PM