TorontoSun.com: Mikkelsen gets his creep on in 'Hannibal' by Bill Harris 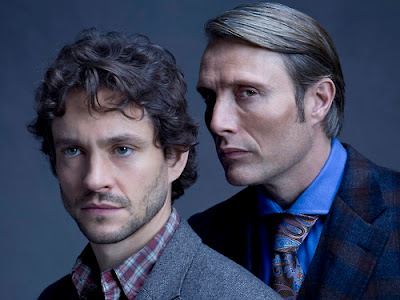 "Hannibal doesn't have a master plan. He doesn't know what's going to happen tomorrow or next year. But for Hannibal, Will is a fantastic opportunity, a very skilful young man, with some potential in there."

"Hannibal cannot play his cards open. He has to be lying. And in order to be a good liar, you have to believe what you're saying yourself. So we're trying to play it as honestly as possible in every scene, even though it's one big manipulation. Hannibal almost is not even aware himself."

Hugh Dancy: "And I think there's every reason for it to be called Hannibal, not least because of the name recognition, but in the first few episodes at least, it makes sense that a lot of time is spent on understanding who Will is, because the audience is going to be less familiar with him. You don't have to do that with Hannibal Lecter.

Email ThisBlogThis!Share to TwitterShare to FacebookShare to Pinterest
LABELS: Hugh Dancy as Will Graham, Interviews, Mads Mikkelsen as Hannibal Lecter