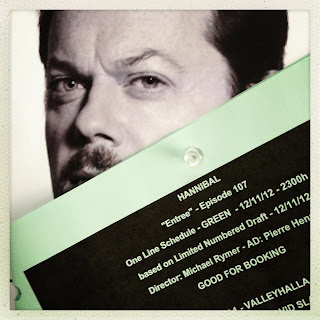 As announced by Entertainment Weekly last week, the brilliant Eddie Izzard will guest star on Hannibal, playing an inmate at the Baltimore State Hospital for the Criminally Insane -- the facility at which Hannibal Lecter is eventually incarcerated. Look for Eddie's character, who claims to be "the infamous Chesapeake Ripper," to make his appearance on Episode 6, entitled "Entree." #EatTheRude

A Note on "Entrée" 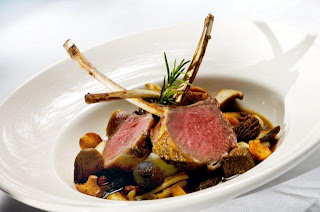 An entrée is a dish served before the main course.

Seven hundred miles to the southwest, in the cafeteria at Gateway Film Laboratory of St. Louis, Francis Dolarhyde was waiting for a hamburger. The entrées offered in the steam table were filmed over. He stood beside the cash register and sipped coffee from a paper cup.

In "The Silence of the Lambs"

Jame Gumb took three TV dinners from his microwave oven. There were two Hungry Man dinners for himself and one Lean Cuisine for the poodle. The poodle greedily ate her entrée and the dessert, leaving the vegetable. Jame Gumb left only the bones on his two trays.

Hannibal was trying to forget his lunch at school, an entree known as "Martyr's Relics," and he examined the bills of fare with keen interest as he passed. Soon he hoped to have the funds for a birthday dinner, and he was looking for sea urchins.
POSTED BY Damian T. Gordon .....AT 11:54 AM