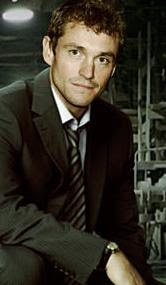 Will Graham is almost an American version Benedict Cumberlatch’s Sherlock who is riddled with eccentricities but primed with intelligence. He is good looking, but oblivious to the admirers that surround him. He’s quite aware he’s made up of some different bits, remarking at one stage that he could even have Asperger syndrome. He has been teaching because he couldn’t handle the social requirements and, according to his colleagues, has a “fear” of almost everything.
He may find it difficult to look people in the eyes when he talks to them, but Graham can also work out the same person pretty quickly – especially those, like him, who suffer from mental disorders.
He’s not the ‘cool cat’ ladies man (in fact, this guy lives with his dog) that William Peterson played in “Manhunter” – this guy is slightly odder. Instead of designer suits and hair salons, the Graham in “Hannibal” is more likely to be spending his cash on text books.
When we first meet Graham in the pilot he’s teaching a class at Quantico, when he’s approached by special agent Jack Crawford, of the behavioural science unit, about doing some field work.

"I'm really excited about it, the script is great, really clever," Hugh Dancy told ComingSoon.net. "I've read the first episode, but it's not directly adapted because you'd begin with the backstory of Red Dragon, which is when Hannibal is still out and about and before he's even been identified as a criminal. It's all extrapolated from their little bit of backstory in the first novel. Because the source material is there, Bryan has talked me through the first season and potential second season, and it's exciting, it's good stuff."
He told them how he enjoys doing television since it allows him to spend more time developing his character. "I think the characters in this story are really going to benefit from that, because the way that Bryan is painting it as a slow and quite elaborate dance between Hannibal and Will Graham, and the way these two circle each other and lock into each other. Obviously, you can do that in a movie, but I think it works particularly well seeing a character go through a very slow degradation… it's just right for the medium."
As far as developing the character even though he still has another month of his Broadway show Venus in Fur: "I've been thinking about it and I've been reading around the area and I've talked to Bryan a few times and I've actually met a couple of people."
He continued, "What I really like about Bryan when I met him the first time is he said, 'Obviously, there's been great versions of this story told before. We're not doing that. We're doing our own version of the story - we want it to be definitive without trying to undermine anything that's come before. So, that to me is a good ballsy way to go into it and I was very impressed by that."


More information, with possible spoilers from "Red Dragon": http://reddragonspoilers.blogspot.ie/search/label/Will%20Graham
POSTED BY Damian T. Gordon .....AT 10:11 AM