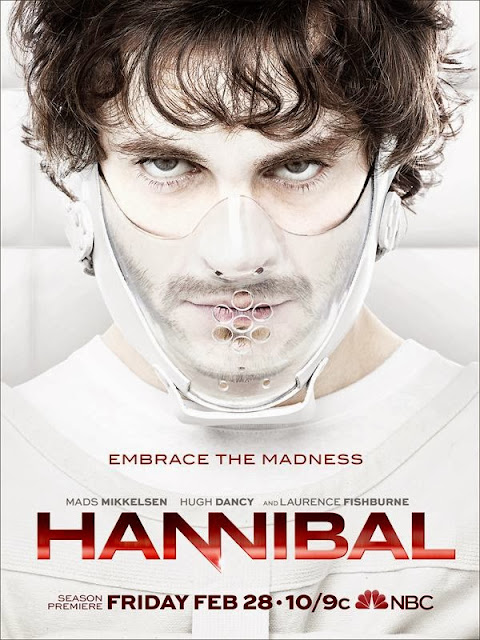 UNIVERSAL CITY, Calif. — Dec. 19, 2013 — NBC has announced it will premiere the 13-episode second season of the critically acclaimed drama “Hannibal” at 10 p.m. (ET/PT) Friday, Feb. 28 following “Grimm” after the previously-announced conclusion of the 10-episode run of “Dracula.”

From creator Bryan Fuller, “Hannibal” stars Mads Mikkelsen as brilliant psychiatrist Dr. Hannibal Lector, who is working with the FBI and gifted criminal profiler Will Graham, played by Hugh Dancy, to look into the mind of serial killers. Based on Thomas Harris’ best-selling novels, this series is the prequel to the story that began with the feature films “Red Dragon” and “Silence of the Lambs.”
The series also stars Laurence Fishburne as Jack Crawford, the head of the FBI’s Behavioral Science Unit. Caroline Dhavernas and Hettienne Park also co-star.

“Bryan and his team are running on all creative cylinders once again and have delivered episodes full of intrigue, scares and surprises,” said Jennifer Salke, President, NBC Entertainment. “The show continues to astound us with its incredible aesthetic beauty and its amazingly talented cast.”

Vulture.com rated “Hannibal” as the second best show on all of television — broadcast or cable — in 2013, calling it “a daring series,” and adding “This is the most visually and atmospherically striking network series since “‘Twin Peaks.’” The Chicago Sun-Times added that “Hannibal” is “deliciously disturbing and is bound to leave viewers hungry for more.”

TV critic Alan Sepinwall of HitFix.com said “Hannibal” had an “amazing first season of television.” The New York Post said, “The series is the most beautifully shot and produced show on network TV.”

“Hannibal” is from Gaumont International Television in association with Sony Pictures Television Networks.

Email ThisBlogThis!Share to TwitterShare to FacebookShare to Pinterest
LABELS: Season 2