FEATURING THE STARS OF TRUE BLOOD AND HANNIBAL...

Directed by Peter Lindmark, EXIT is a tense and exhilarating Swedish thriller surrounding Thomas Skepphult (Mads Mikkelsen), a wealthy investor at the peak of his career. On the cusp of securing one of his biggest and most lucrative deals, which will see he and his fellow partner sell their stake in a rival firm, Thomas seems to have it all – a beautiful wife, Anna (Kirsty Torhaug), a lovely daughter, Ebba (Johanna Dickson), an expensive villa by the water and a financially secured future. Just before the deal is to complete, Thomas’ partner and mentor William is found brutally murdered, and Thomas is named as the prime suspect. Due to the financial incentive, and a harrowing link to the murder weapon, Thomas must embark on a desperate campaign to protest his innocence and protect his family, eliciting the help of two closely trusted allies. Thomas learns that when things go sour in the upper echelons of the corporate world, and a way out is not for sale, the wealthy and powerful must summon the same raw survival instincts as the common man.

Reminiscent of films like The Fugitive, EXIT is a gripping action thriller brimming with surprising twists and turns. Notably strong performances include Alexander Skarsgård as Fabian von Klerking, Thomas’s faithful associate; and Samuel Fröler as the psychotic and menacing villain, Morgan Nordenstråle.

Mads Mikkelsen once again combines high drama and action convincingly, proving his worth as arguably the best Nordic actor of a generation. Stylish Swedish production and excellent performances make EXIT a must-see for UK Scandi-philes looking for their next fix! 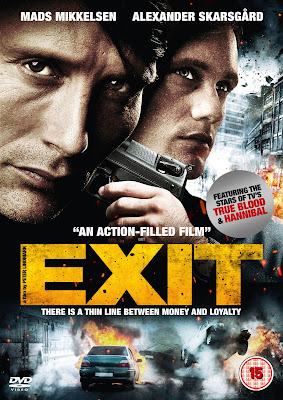