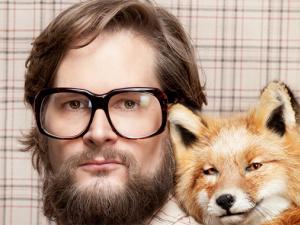 Exec producer Bryan Fuller revealed Thursday at Comic-Con that the crime series’ second season will return in a two-parter followed by a trial in Episode 3. “We have the season arc crafted, and it’s a doozy,” Fuller teased to a packed ballroom. “We just finished breaking Episode 3, and we are breaking Episode 4 now.” The Season 2 openers will act as a pseudo pilot, Fuller said, reintroducing characters who now find themselves in much different places. “Will knows something no one else knows, and it’s a great place to put a character,” Fuller said. “One of the things I was most excited about in Season 2 was seeing Will Graham hit rock bottom.”

:
:
The recap was a reminder of how Hannibal routinely depicts some of the most extreme graphic kills on broadcast TV. Fuller says network suits rarely object. Except on the Season 1 episode “Coquilles,” in which a killer mutilates his victims into angels to watch over him in his sleep. “We had two people who were nude and we saw their buttocks,” Fuller said. “They were dead, they were flayed open, and cracked in many ways. Their butt crack was the least offensive of the ones they were sporting, [but] the network said no. … I asked why, because of the exposed spine and muscle tissue and flayed skin? I said, ‘What if we fill the butt cracks with blood so you can’t see them?’ They said OK.”

Fuller & Co. spoke often and fondly of Red Dragon, the 1981 novel by Thomas Harris that Hannibal is adapted from, joining numerous films (The Silence of the Lambs, Manhunter, Red Dragon) that feature the famous Dr. Hannibal Lecter character. “I was going back to that book until the day we finished shooting,” said Dancy. “I read it a couple of times and tried to let it be in the background.” Slade, whom De Laurentiis announced will direct more episodes, wants to film the book’s real ending into the show’s future. Absent co-star Mads Mikkelsen also got love from the panel. “He screen tested because he was not so well known,” said De Laurentiis of the Danish actor, who at the time was most familiar to stateside audiences for Casino Royale. “But I think he really owns the role now.” Fuller described the take on Lecter that won Mikkelsen his vote. “It was about finding an actor who had a specific take on the character,” said Fuller. “He said he didn’t want to play Anthony Hopkins or Brian Cox. He wanted to play Satan.”
POSTED BY Damian T. Gordon .....AT 4:34 AM