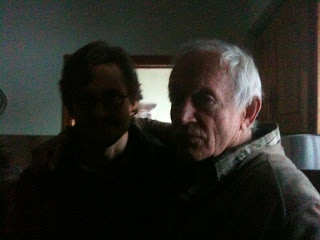 A SERIAL KILLER’S MACABRE TROPHY RAISES QUESTIONS AND CLUES TO MOTIVES AS WELL AS SECRETS - The BAU team hunts a serial killer who digs up his victims, creating a totem pole of their bodies as a macabre trophy. When Nick Boyle's (Mark Rendall) body is found, Jack (Laurence Fishburne) & Alana (Caroline Dhavernas) question Abigail (Kacey Rohl) about his death. The resurrection of Nick's body enlightens Will (Hugh Dancy) to some of Abigail's secrets and Hannibal (Mads Mikkelsen) convinces Will to keep some of his own. Attempting to assert independence, Abigail agrees to write a book with Freddy Lounds (Lara Jean Chorostecki) and in the process, reveals her biggest secret to Hannibal.
POSTED BY Damian T. Gordon .....AT 7:39 PM