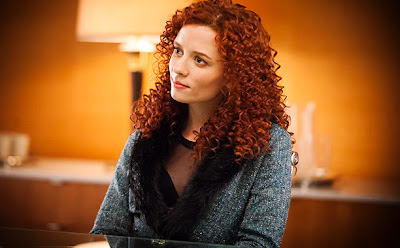 Freddie Lounds may be a tabloid journalist more interested in a story than morals, but make no mistake: She is also a sociopath, playing on the same field as Hannibal’s widening bench of crazies. “I think it’s a really interesting character to see on TV: a female sociopath. We don’t often see that,” says Lara Jean Chorostecki, who plays the fiery-haired reporter.

Thus far on the series, we’ve seen Freddie actively interfere with the FBI’s hunt for killers. We’ve also seen her confront other characters with hard truths. That ambiguous balance — who and what concerns her, as with Kacey Rohl’s Abigail, who is suspected of being complicit in her father’s serial killing — continues throughout the rest of the first season, as more of the character’s “complex layers” are revealed: “Freddie isn’t just a foil, as would be so easy to dismiss her,” Chorostecki says.

Fans of Thomas Harris’ novels, upon which Hannibal is based, will remember that Freddie is actually Freddy — she is a he. But the pronoun flip is more than skin-deep. As Chorostecki tells it, creator Bryan Fuller came to her after she was cast with a specific visual inspiration. “[He] said to me, ‘Do you know of Rebekah Brooks?’ And I said, ‘Yes, I do, I’ve heard of her, of course.’ And he said, ‘Well here’s a picture. This is what we’re modeling you on.’”

Brooks and Chorostecki share curly red hair, but Freddie’s locks are a special effect onto themselves: “The hair was always the starting point,” Chorostecki says — it’s a nod to Freddy’s famous end in Harris’ novels, and it’s all of a piece with the character’s style. Freddie may be chameleonic, but she isn’t a coward. “She’s never been camouflaged. So even when she goes to visit [Mads Mikkelsen’s] Lecter for the first time, as you saw, she’s not really in discreet outfits at any time.”

Freddie returns on tonight’s “Entrée,” which also includes the introduction of a man claiming to be the “Chesapeake Ripper,” played by Eddie Izzard. “I had heard that he was coming in before that and just got very excited, and then I heard Freddie got to play with him and then I got even more excited,” Chorostecki says. Also expect her character to spend more time with Laurence Fisburne’s Jack; and as she points out, “We don’t really know yet what went on with her and Lecter after he threatens her in the office.”

How much has Fuller mapped out Freddie’s arc? Chorostecki says that he has the “Red Dragon” storyline planned for season four, if and when that happens, which means her character’s hottest moment is still a while off. For now, Freddie will continue to become more involved — even, on occasion, providing assistance — and she won’t come out of it without a little bit of blood. Keep an eye out in a few weeks, Chorostecki says. “[Freddie] certainly gets very close to the action.”
POSTED BY Damian T. Gordon .....AT 6:16 PM