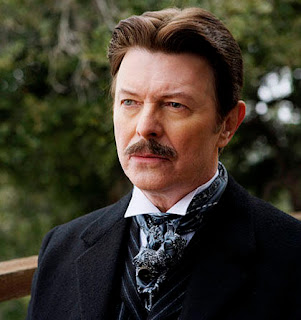 Bryan Fuller is looking for a pretty big name to join "Hannibal" in Season 2. Zap2it can reveal exclusively that the "Hannibal" showrunner plans to reach out to David Bowie for a major role if NBC gives a second season the green light.

"I guess my dream casting for the show would be to cast David Bowie as Hannibal Lecter's uncle," Fuller tells Getty Images Entertainment, courtesy of Zap2it. "If we get a second season I will reach out and see if there is any interest."

Bowie clearly has a love for Hannibal Lecter's storyline, as he attended the "Hannibal" movie premiere back in 2001. For those of you hoping this casting pans out, Fuller says things are looking pretty good.

"NBC are saying that they're very happy with where we are at so I hope that indicates towards a second season because I have a plan for Season 2 that I think would be very exciting," Fuller reveals. "I actually have story arcs through Season 7. I think seven seems about right."

Though it will take several seasons to get there, Fuller would like to incorporate some of Hannibal Lecter's most famous tales into the NBC show several years down the road. The planned end of the series is still far off, but Fuller would like to one day introduce a "Clarice Starling type character" to help Will hunt Hannibal down.

He continues, "In the seventh season it would be interesting to see Will Graham and a Clarice Starling type character come together for an adventure with their nemesis, Hannibal Lecter."

As for whether the series will end with a movie, Fuller says, "I would not mind that at all." Hopefully he can get to that "Pushing Daisies" movie first.

"Hannibal" stars Mads Mikkelson as Hannibal and Hugh Dancy as Will Graham. It airs Thursdays on NBC at 10 p.m. ET.