TorontoVerve: 'In the Belly of the Beast': Actress Lara Jean Chorostecki Talks About Her New Role in NBC's Hannibal 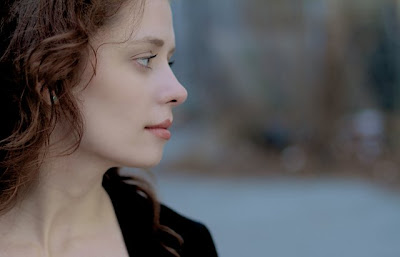 Some highlights below, the whole interview here:
http://www.torontoverve.org/2013/04/in-belly-of-beast-actress-lara-jean.html
:
:
TorontoVerve: You play tabloid blogger Freddie Lounds on the show. Your Freddie is quite different from the "Red Dragon" novel and film adaptations (Manhunter & Red Dragon), isn't it?
Lara Jean Chorostecki:: Yes, because Freddie was a ‘he’ in the novels and movies, and now Freddie is a ‘she’ so that is already a huge difference. And ‘he’ was previously played by Stephen Lang (Manhunter) and Philip Seymour Hoffman (Red Dragon). Before shooting Hannibal, I watched Red Dragon. First of all, Philip Seymour Hoffman is incredible in it, but second, he’s so schlubby and so wonderfully sleazy. I would say that female Freddie is also wonderfully sleazy, but in a more sophisticated way. She wears high fashion and she’s very good at what she does, but she absolutely has no moral compass whatsoever. Nothing yet has fazed or scared this girl, but fans of the book and movies know that something will eventually very much terrify her.
:
:
TorontoVerve: Show producer Bryan Fuller (Pushing Daisies, Dead Like Me) asked you to draw inspiration from News of the World editor Rebekah Brooks who was charged with the phone hacking conspiracy. What did you draw from her?

Lara Jean Chorostecki:: There was a Vanity Fair article written last year by Suzanna Andrews called "Untangling Rebekah Brooks" and that gave me a ton of insight because it outlined so nicely what her rise to fame was and maybe some devious things that happened. Time will tell in her trial what she’s guilty or not guilty of. So what I drew from her was the idea of someone who is unapologetic and pretty fierce in pursuing an ultimate success for herself. The way Bryan described her is even though she’s under suspicion and being investigated for some not-so great things right now, she’s still the type of woman who can find her way around anything. And even though she may get you fired, the next day you might just send her ‘thank you’ flowers because she managed to find you a better job. So that drive that I sense in her is definitely what inspired me.
:
:
TorontoVerve: In "Red Dragon", Freddy's unscrupulous tactics result in much friction between him and FBI agent Will Graham. How does your Freddie mix things up with Graham and Lecter in the series?

Lara Jean Chorostecki:: Actually Freddie and Will Graham have quite the antagonistic relationship. I don’t think he’s too fond of me. I think when you watch the series, you’ll probably get a sense of that. I also had a lot of fun with Mads Mikkelsen (Casino Royale, Coco Chanel & Igor Stravinsky) who plays Hannibal. He’s incredible and such a good actor. He’s so inspiring to work with. Freddie’s interaction with Hannibal in particular gets interesting at times. I think he finds her pretty fascinating. There’s a lot of thematic stuff throughout our first season with identifying parts of yourself in other people. When Hannibal first meets Will, he identifies a part of himself in Will, and everybody is identifying a psychopathic quality in each other. I gotta say that the most fun I had was when Freddie interacts with Jack Crawford, who’s played by Lawrence Fishburne (The Matrix, CSI). When I get to sit down with Jack, he’s just so intimidating and I have to be absolutely unafraid of him. Freddie doesn’t appear in the pilot. She appears in Episode 2 for the first time and when Jack says my name, you sense there’s already a history between us where I’ve gotten under his skin a number of times.
:
:
TorontoVerve: I think it’s great for your character because Freddy Lounds doesn’t have much to do in the novel, but now it really looks like they’re going to flesh out the character and introduce her to people whom ‘he’ originally never met.

Lara Jean Chorostecki: Absolutely, yeah, she appears in 6 of the 13 episodes so strongly. I interact with almost everyone and it’s been a real blessing to be that type of character. I think that Bryan has brilliantly utilized this character to be able to fill things in when needed and come in and stir up trouble. Also, Bryan has plans for a good long run and it’ll be really exciting to see what he does with Freddie until maybe something happens to her -- I don’t know, we’ll find out.