NST.com: Hooked on the dark mind by Subhadra Devan 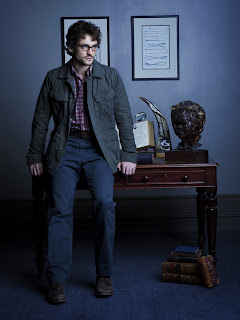 BEFORE the hit supense-thriller The Silence Of The Lambs, Dr Hannibal Lecter was a brilliant psychiatrist in the employ of the FBI. His task: To help an unusually gifted criminal profiler, Will Graham, who is haunted by his ability to empathise with serial killers.

Unknown to Graham, Lecter also has a particular insight into these horrible crimes and the psychopaths who commit them. For he is the most gifted killer of them all.

Hannibal is the new television thriller from Bryan Fuller, the creative force behind Pushing Daisies, Wonderfalls and Dead Like Me.

The series stars Mads Mikkelsen as Hannibal, Hugh Dancy as Graham and Laurence Fishburne as Jack Crawford, the head of the FBI’s Behavioral Science Unit.

Dancy, a British actor, is seen on screen (Black Hawk Down, 2001 among others), stage (BBC’s Madame Bovary in 2000) and television. He recently starred in Adam, playing the title role of a young man with Asperger’s syndrome struggling to survive in New York City. The movie premiered at the 2009 Sundance Film Festival and was awarded the Alfred P. Sloan Feature Film Prize.

Dancy says his character, Graham, is intense, riddled with nervous ticks, open to “the darker stuff “ and averse to being analysed.

“He walks into a room with anybody who’s like a psychiatrist and they immediately start rubbing their hands together. Oh, great, here comes my next paper, you know. And he feels that coming a mile off. So he shuts down. That I think is why he’s so initially hostile towards Hannibal, because he rightly thinks that Jack has brought in some other expert to profile him.

“It’s a dark role, but fascinating. It’s a rich character with lots to explore. The hardest part of playing Will is that he’s not a social person, quite shut off and rude. That’s also the most interesting thing about him,” he says in a phone interview.

Dancy was hooked after reading the first episode, and went on to read the Thomas Harris novels on Lecter. He thinks Fuller’s vision for the series is fascinating because he has envisioned the story for even up to five seasons.

“I was intrigued with Will after reading the first episode. I asked Fuller about the character and he described to me up to four or five seasons. It’s a very full vision of what he wants to do. Each season takes a different twist and turn, offering me the opportunity to stay interested. So yeah, I would stay on for that long.”

Graham, as imagined first by Harris and then by Fuller, is a very complete character.

“The question that hangs over Will is how much, how intrinsic a part of him is this violence that he can so readily access? Because he can empathise with these killers but at the same time he tries to preserve judgment over them. And he still has a very highly developed sense of right and wrong,” says Dancy.

“But he can oddly enough put that to one side entirely in the process of jumping into their heads. The very frightening question is which part of him is more real? And it’s also the fault line in Will that Hannibal spots immediately and sets out not to, I think, manipulate. He wants to push Will closer to what he feels is the truth. He’s dabbling with Will’s brain. Yet, Will is someone he can walk with in life. The question is how much do they have in common.”

Hannibal is a dark TV show with lots of gore and murder. Dancy describes it as “psychologically interesting, even cerebral and the daddy of crime shows” on the telly today.

“Viewers will see something quite unique, a visual darkness and a richness you don’t normally see. The purpose of the violence in the show, I think, is that it casts light on who the characters are. And I think the horror comes from the area in their minds that we’re pushed into as the audience,” he explains in a release.

“Every time we’re approaching one of those sequences, or a sequence over in the morgue, you know, forensic sequence, I try to approach that from the point of view of why is that here in our story? You know, what is this going to teach us about these characters? And, again, what is the cost of it, particularly to Will?”

Meals are very much a part of the show. While Hannibal indulges in “gourmet” fare such as frontal lobes, Dancy says he’s also an adventurous person.

“The weirdest thing I’d eaten was in Sarawak. I was filming at night in the forest and a man pulled me over, picked something off a branch and cooked it with his lighter. It crackled. It was a huge bug. It was quite tasty. Like a nice shrimp.”

What Dancy must have eaten is probably a cicada because I’ve eaten them too in Miri, Sarawak. They are low in fat and high in protein. Dancy was in Sarawak to film The Sleeping Dictionary opposite Jessica Alba (released in 2003).

Early reviews of Hannibal have billed Graham as the most watchable character so far, with his social ineptness and a cunning that allows him to make the dots in a case.

“Well it’s nice to be called that. I think it’s because audiences enter the show through Will with the first few episodes. Further in the season, it’s more of a duet with Hannibal (Lecter). There are two distinct worlds in the show — the world of the FBI and the crimes, and the work of Hannibal and his mind. Will is in both, so I have a lot to do.”

He adds that all 13 episodes have been filmed for the first season. “I suspect people will engage in it with the same enthusiasm as we have.”
POSTED BY Damian T. Gordon .....AT 5:51 PM