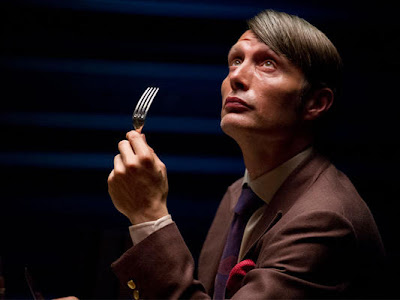 HANNIBAL HIDES A SECRET FROM JACK BUT NOT WITHOUT CONSEQUENCES - Jack (Laurence Fishburne) theorizes that Abigail (Kacey Rohl) may have aided her father, Garret Jacob Hobbs (Vladimir Cubrt), in his serial killings. Against Dr. Alana Bloom's (Caroline Dhavernas) advice, but at Hannibal's (Mads Mikkelsen) behest, Abigail is escorted back to Minnesota, where she discovers much violent hostility against her and her family. Things go from bad to worse when a copycat killer murders a friend of Abigail. Hannibal suggests they hide the body to protect Abigail — but secrets come at a cost. Also starring Hugh Dancy, Hettienne Park, Aaron Abrams, and Scott Thompson.
POSTED BY Damian T. Gordon .....AT 5:58 PM

Email ThisBlogThis!Share to TwitterShare to FacebookShare to Pinterest
LABELS: Potage