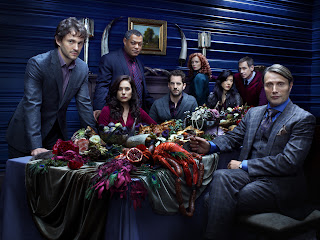 After giving up on “The Following,” and never being all that into “Bates Motel” to begin with, I was genuinely surprised how much I liked NBC’s “Hannibal.”

The drama, which premiered last week and returns with a new episode at 10 p.m. Thursday, does, in fact, feature Hannibal Lecter (played with restrained glee by Danish actor Mads Mikkelsen).

I’m always complaining about the predictable nature of cop shows — how one seems to crib from the other, and how most police detective characters are cut from the same cloth. They’re either quirky to a fault (think Sherlock on CBS’s “Elementary”) or don’t play well with others (insert the name of any “Law & Order” cop here).

Will has some of that shading — he has an innate ability to get inside the minds of depraved killers and can somehow deduce their motives out of thin air  — but the show itself is so different, and Dancy’s performance so good, that you won’t hear any complaints from me.

In the first episode, Will was brought on to consult on a case; college coeds were being abducted from campuses in Minnesota, and Jack Crawford (Laurence Fishburne), head of the FBI’s Behavioral Science Unit, wanted Will’s input because he has “a very specific way of thinking about things.”

“What he has is pure empathy,” Hannibal said about Will later on. “He can assume your point of view or mine and maybe some other points of view that scare him. It’s an uncomfortable gift.”

During the first interaction between Will and Crawford, we learned that Will finds it difficult to be social and, on the autism spectrum, he falls “closer to Asperger’s and autistics than narcissists and sociopaths,” he explained.

Will getting into the heads of killers is most often illustrated by scenes of him actually committing the various crimes he’s investigating. There are also lots of other stylistic touches from creator Bryan Fuller, whose credits include “Pushing Daisies,” “Wonderfalls” and “Dead Like Me” (also “Mockingbird Lane,” NBC’s misguided remake of “The Munsters,” but let’s not talk about that).

Fittingly enough, that first case, with the missing girls, involved a cannibalistic murderer but not, natch, Hannibal himself.  He wound up in Will’s orbit after Crawford approached the psychiatrist about profiling someone, but we still don’t know if it’s Will or the killer they were pursuing.

At this point, nobody knows what Hannibal is doing with his spare time, though there are lots of sly nods toward what we already know about the character — including an extended scene of him preparing liver for dinner (no fava beans in sight).

He showed more of his true colors by the end of pilot when, as he and Will closed in on the killer, Hannibal called the guy to warn him.

Moving forward, the show will focus on the unlikely partnership between Will and Hannibal. But this is ultimately a showcase for Dancy, who allows us to empathize with Will as much as he’s able to empathize with others. Danes may want to clear off some space on the awards shelf for her hubby.
POSTED BY Damian T. Gordon .....AT 6:38 AM