Bryan Fuller on 'Hannibal,' Honoring the 'Most Cherished Villain in Pop Culture' and the Likelihood of a 'Pushing Daisies' Movie Kickstarter 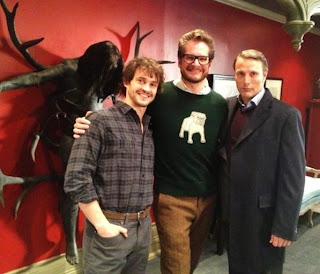 If you had any doubts that Bryan Fuller could not only revitalize two of Thomas Harris' most memorable characters, Dr. Hannibal Lecter and Will Graham, in a meaningful way and also do it with his signature flair fully in tact, put them to rest right now. NBC's "Hannibal" (premiering on Thursday, April 4 at 10pm) is one of the best new shows of the summer and it's also, quite possibly, the very best thing Fuller has ever done -- and that's saying a lot when you're talking about the guy that created shows like "Dead Like Me" and "Pushing Daisies."

Starring Hugh Dancy ("Martha Marcy May Marlene") as Will Graham, Mads Mikkelsen ("Casino Royale") as Hannibal Lecter and Laurence Fishburne as Jack Crawford, "Hannibal" is intelligent, stylish, complicated and extremely dark -- everything fans of Harris' famous serial killer have been waiting for. Indiewire recently sat down with Fuller to discuss reviving Dr. Hannibal Lecter, which characters fans won't be seen on the series, and a possible "Pushing Daises" zombie movie.


Some highlights, but the complete interview is brilliant, so don't miss it:
http://www.indiewire.com/article/television/bryan-fuller-interview-hannibal
:
:
Scott Neumyer: It's hard to imagine how much darker he can go when he literally starts the series covered in blood.

Bryan Fuller: Right! [laughs] And I have to tell you that Hugh Dancy... After meeting his parents and hearing them tell this story of how he enjoyed some sort of play-acting murder as a child, it was hard not to recall the day on set when he gets sprayed with blood. He was so giddy and school-boyish.

I asked him, "Are you cool with the blood?" He was like, "Oh my God, I love it! I love being sprayed with blood." It was like he was able to transcend where the character was in the scene and be a man who enjoys the ghoulishness of the world in an infectiously fun way.

:
:
Scott Neumyer: The first thing that threw me about Mads' performance as Lecter was his accent, only because I've seen "The Silence of the Lambs" so many times. But once you get past that initial shock, it's a master performance. I feel like when Mads walks off set, he doesn't skip a beat -- like he lives that life of expensive suits and fancy dinners and refinement.

Bryan Fuller: [laughs] He couldn't be more different. It's funny because when I go to set, I'm always ogling his suits and lifting the jacket to see who makes it and he just has no interest. He doesn't care. Outside of the character, Mads is in tracksuits and stocking caps. He has no pretense about finer quality clothes. He's so not Hannibal in any way, shape or form. He's easy to smile or crack a joke or tease. He's like a really rambunctious brother as opposed to this very sober guy.

:
:
Scott Neumyer: Will we see other characters from the Lecterverse on "Hannibal" at some point?

Bryan Fuller: Absolutely. One of the interesting things about developing this first season is that one of the episodes that I was dying to do was exploring Lecter's relationship to [former patient] Benjamin Raspail and Jame Gumb [aka Buffalo Bill]. I was so excited about that, but how it works legally with who we get to play with and who we don't is this: If a character was introduced in "Red Dragon" or "Hannibal," we have full access to them. If they were introduced in "The Silence of the Lambs," MGM has full access to them.

We had plotted out a multi-episode arc with Benjamin Raspail and the Jame Gumb character. It was exciting because I really wanted to see Lecter put that head in the jar and park that car in the storage unit. Unfortunately, MGM told us no, that they own that character. We even tried to trade with them and went back to them three or four times -- they still said no. My secret hope is that they'll see the show and think it's really cool and say, "Okay, we'll partner with you and let you use the Clarice Starling character and this will become the definitive Hannibal Lecter story." That's my dream.