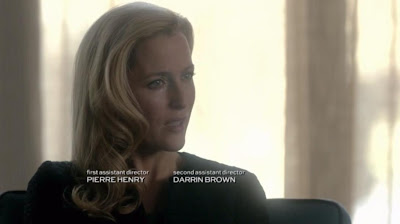 The show has an impressive cast that’s also aided by veteran actor Laurence Fishburne (THE MATIRX) and, as the series arrives in its final few episodes, THE X-FILES femme fatale Gillian Anderson who, in a novel twist, plays Dr. Bedelia DuMaurier, confessor psychiatrist to Lecter, his only outlet in which he can unburden himself of the sanguinary secrets he holds. It was a role that Anderson was perhaps born to play.

“I’ve been in therapy since I was 14, so I didn’t have to research much,” the actress told FANGORIA on the HANNIBAL set in Toronto last month.

“I think that experience has done the most for me.  But as far as the character, I think the intensity of Hannibal informs me. I mean, he’s not going to get therapy from someone who doesn’t match his wit and intelligence.”

In serendipitous fashion, Anderson’s presence acting as female foil to Mikkelsen’s human monster has its roots in her legacy as Dana Scully, her beloved government paranormal investigator in THE X FILES.

“THE X-FILES started shortly after SILENCE OF THE LAMBS came out, and Chris Carter told me shortly after we began that Scully was in fact based on the character of Clarice Starling. And although this character is different, something about it feels like we’re on the same conversations, you know. It has come full circle. The relationship here is somewhat elusive. My character knows its serving a purpose, being with Hannibal and I think she feels protective over him. We learn that she is retired but he wouldn’t accept that, so now he is her only patient. They feed off each other, if you will.”

Since the act of feeding is so paramount to HANNIBAL’s “ick” factor, the show does not shy away from what exactly Dr. Lecter is eating or where’s he’s getting these meaty “protein scrambles” he continuously consumes. Anderson has her own ideas about the act of cannibalism.

“I know that it’s addictive,” she says. “Isn’t that wild? You get a taste for same species blood and something happens chemically and you want it again. It happens with mice…other animals…maybe I’m making this up? I don’t know! Maybe humans are tasty. When Lions taste humans they want humans and less buffalo. And that’s why I think [HANNIBAL] will do very well…everyone loves a cannibal, don’t they?”
POSTED BY Damian T. Gordon .....AT 6:56 PM