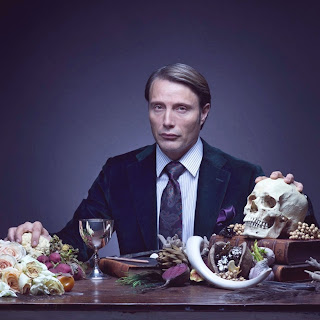 Some highlights here, but check out the whole interview:
http://www.dreadcentral.com/news/65200/exclusive-interview-mads-mikkelson-hannibal
:
:
DreadCentral: It seems like he likes to really get at him and torture him a bit. What is it about Will that he’s so obsessed with?

Mads Mikkelsen: Hannibal is very difficult to describe because he’s not the classic psychopath. He’s not doing it for the reasons that other serial killers do: it’s not the childhood, it’s not the mother who was a junkie. That’s way too banal for him. It’s something else. He thinks the threshold between life and death is extremely beautiful. That’s where something happens. I think the closest thing we can compare him with is Satan, the fallen angel who sees beauty when the rest of us see evil. It’s the same when he’s poking at Will and playing with Will; he can’t help it. But it’s because he can do it. He sees an opportunity and he can’t help himself. He’s a genius who wants to see if he can get away with it.

:
:
DreadCentral: With Thomas Harris elaborating on some of his backstory involving Lithuania and the Nazis, will that be a part of the show?

Mads Mikkelsen: We do deal with the fact that he’s from Lithuania, hence the exotic accent. So we get away with that. He studied in Paris and then probably went to England, but that doesn’t make him a Brit. But yes, so far, he is from Lithuania, but we are not dealing with the backstory from the Second World War. Also, maybe it was a little too banal. As I said before, he’s Satan. There is no reasoning. We didn’t want that to play a part.