DreadCentral: Hannibal Series Preview: Who's the Smartest Man in the Room? by Drew Tinnin 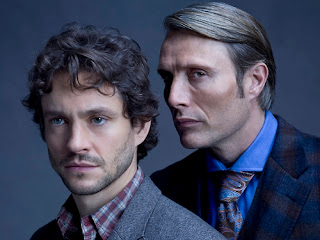 A few highlights below, and full review here:
http://www.dreadcentral.com/news/65249/hannibal-series-preview-whos-smartest-man-room
:
:
In a nutshell, “Hannibal” is a raw, intellectual procedural following Will and Hannibal as they track a different serial killer each week. Through the course of their investigations, you slowly find out more about Hannibal through Will's findings and theories about the killer they seek. Then Hannibal, as Will’s oddly engaging therapist, discusses the emotional effects of the case while dealing with the usually violent conclusion at the end of each episode.

:
:
Hannibal just sees the world in a different way than us. So do these other serial killers but not as clearly as he does. There is no line for him, which is why he sees beauty in killing. He is pure in this way, and Hannibal must stay mysterious for the show to work long-term.
:
:
Obviously, having these interesting characters on television means you can think about their motivations and discuss them even more than before, if you so desire. Usually shows like “House” or “Sherlock” are compelling mostly because the lead character is always the smartest man in the room. “Hannibal” gives you two such characters, and the compelling thing is guessing which one of them is smarter.
POSTED BY Damian T. Gordon .....AT 6:22 PM