The Wall Street Journal: My Lunch with Dr. Hannibal Lecter 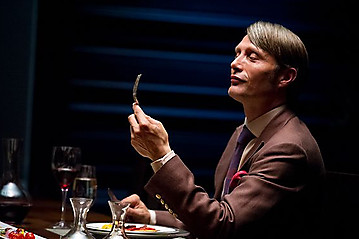 Mr. Mikkelsen, the Danish star perhaps best known to American audiences as Bond villain Le Chiffre in 2006′s “Casino Royale,” is relishing his work on  NBC’s new “Hannibal” (10 p.m. Thursdays, starting April 4), which focuses on the time the good doctor was free and getting acquainted with FBI agent Will Graham (Hugh Dancy). “I’m having great fun,” he said over a juicy steak yesterday in midtown Manhattan, mere hours after he concluded some pickup shots for the show. No, liver and fava beans were not on the menu.

Playing Hannibal, of course, involves a lot of eating on set, but it’s good, gourmet food, even if it is supposed to be–for fiction’s sake–human flesh. “I like it,” Mr. Mikkelsen said, explaining that he actually does eat the food without spitting any of it out. With this much munching, though, how does he keep the weight off? “I have a great metabolism,” he said, adding that he’s learned over the years to take smaller bites when he’s performing a scene over many takes.

And while the role demands that Mr. Mikkelsen savor each morsel with the kind of evil satisfaction you can only expect from Hannibal Lecter, it doesn’t necessarily mean he has to go deep enough into character to believe he’s eating people. “I just treat it as something I like,” he said. Something, he added, Hannibal would do.
POSTED BY Unknown .....AT 10:25 PM