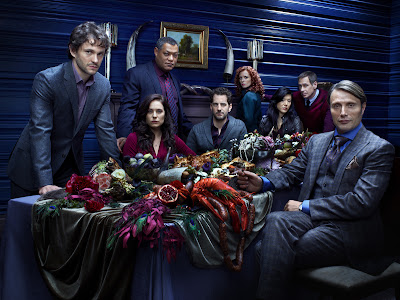 Now, Hannibal, the television series, the brainchild of beloved writer Bryan Fuller (Heroes) and producer Martha DeLaurentiis (widow of the late mogul Dino DeLaurentiis), plays out as a prequel to the events in Harris’ Red Dragon. FBI profiler Will Graham (Hugh Dancy) is assigned by bureau chief Jack Crawford (Laurence Fishburne) to seek council with the brilliant Dr. Lecter (Danish superstar Mads Mikkelsen) a respected psychotherapist. Each week the trio become closer, teaming up to stop a cavalcade of serial killers. Of course, no one knows that Lecter is in fact the most deranged of them all.

“That’s the thing we have to be most careful with,” Fishburne, whose extensive credits include films like Just Cause, Deep Cover and The Matrix trilogy, told us on set in Toronto.

“I’m not supposed to know. Nobody’s supposed to know. The audience knows so it allows them to play along. The tension comes in waiting for me and Will to catch up. I have no reason to suspect Hannibal … after all, I hired him.”

Mikkelsen’s Hannibal is a radically different beast than previous screen incarnations. His cards are hidden, yes, but as personified by the iconic Danish actor, he’s leaner, more sensual and more mysterious. A true wolf in sheep’s clothing, who uses his refined veneer to worm his way into many lives.

“This is a universe we’ve created,” Mikkelsen says.

“The audience knows he’s a killer and you might think, ‘C’mon guys, its right there in a three piece suit. He even has the funny accent!’ He has Jack Crawford sitting here, at his dining room table and that’s his game, all the clues as to who he is are right there. It amuses him. Hopefully there’s something interesting and charming in him though and I’m trying to make him likeable, though he is most certainly a monster.”
POSTED BY Damian T. Gordon .....AT 3:33 PM