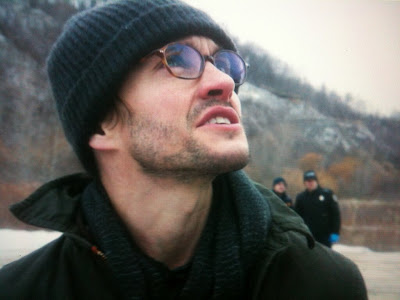 Fearnet.com: Just to start, what was your interest in stepping into a television series? Obviously, Homeland has been a very successful endeavor for your wife, Claire Danes. Did that open a window for you?

Hugh Dancy: I suppose it was there in the background. That wasn’t really part of the process for me, though. I had also worked on a TV show, one season of the Big C, a couple of years before. It wasn’t like a big light bulb went on and I thought, “Oh, I’ve got to find a TV show.” It just came up. I was doing a play in New York last year and the year before and sometimes that serves as…. People can come and see it. They think about casting TV shows and suddenly these offers started to come in, frankly is what happened. Why that would be the case, I don’t know. This particular one (Hannibal), on its own merits, seemed very interesting.


Fearnet.com: Will has an uncanny ability when it comes to piecing together crime scenes. Is he psychic at all?


Hugh Dancy: I don’t think he’s psychic. He’s a detective, but a lot of it is instinctive. In the same way there’s a spectrum that we’re on, and some people further down can’t receive information from other people, there are others who are just more open to all sorts of information that is flying around that most don’t pick up on.


Fearnet.com: Can you talk about the gory elements? Do you ever get nauseous from them?


Hugh Dancy: No, I don’t. The justification for the scenes is that they get us inside Will’s mind. Bryan Fuller is quite artful at using the different instances as the season progresses, other crimes and criminals, to further our understanding of Will’s state of mind, to further the relationship between Will and Hannibal, and Will and Jack and so on. I never felt that I’m just here because, “Oh, now I’m coming to stab someone so we can talk about fingerprints.” That doesn’t really hold any interest for me and I think I would have a problem with that.

With that said, there are obviously days when we are filming horrific crimes. Those are usually very technical days and that’s kind of fun. It’s a bit like filming a love scene. Any passion goes out the window because you are thinking about camera angles and props and prosthetics and special effects.

Fearnet.com: That signature device of Will re-creating some of the crimes in his mind is quite unusual. What is the main purpose of that? Is that for your justification or to show the audience how gruesome the act was, but in a calmer light?


Hugh Dancy: Yes, I think all of those things. In the same way that Will is part empathic and part detective, he’s very good at his job. He’s smart in a rational way, as well as being able to pluck things out of the air. They have the same purpose, that they instruct the audience what happened and are specific to the development of the plot. But I also hope they give a sense of what Will has to carry around, what his burden is. I always felt Will would be a very difficult character to portray on screen, if you didn’t have those sequences and also if you don’t see him at home with his dogs. The two give a full balance of who he is, that he has something he holds very dear to him, which is really quite loveable and heart breaking. Will is so lonely and protects himself with his fishing rods and his dogs and his whiskey and his little house. Then he goes to work and has to deal with these absolutely horrific situations.

Fearnet.com: How would you describe Will’s relationship with his boss, Agent Jack Crawford (CSI’s Laurence Fishburne)?


Hugh Dancy: Jack is a sledgehammer. He will do anything to catch these criminals and do his job. It’s very personal for him. It’s personal for all of us. The dynamic between them as it develops is a feeling from Will that he’s in danger of being broken. There’s a genuine risk to Will in what he does. He’s already taken himself out of it (consulting) to teach. Jack asks him to come back in and the next thing you know, Will is killing a man in his kitchen. And it gets worse from there. One thing that happens is Hannibal starts to lean on Will’s sense that Jack is not protecting him.


Fearnet.com: How do you and Mads Mikkelsen approach a scene and work together?


Hugh Dancy: Obviously, Mads has to do his dance. He has a special dance he does before every scene. That’s not true. There are big differences in the characters we are playing. Mads has to think very carefully about what he gives away as Hannibal. He can’t be too, obviously, rubbing his hands together, because I’d see it. It’s very internal and incredibly subtle, which is one of the things Mads is so good at. Will is going through a fairly tumultuous experience, including when he is in here with Hannibal. We just figure out how to make the scene work together. Bryan’s writing is so rich and complicated and you can’t just expect to come in and (say), “I’ll do my thing and you do yours.”


Fearnet.com: Who is your favorite serial killer that appears during the series?


Hugh Dancy: There’s some quite extreme ones. I enjoy it when I feel they are tied into the rest of the show, which I think they are, by and large very well, either thematically or because Hannibal gets involved and it gets tied into the bigger stories.


Fearnet.com: Can you be more specific?


Hugh Dancy: There’s an episode later on where Will is starting to have hallucinations. I’m hearing things. There’s somebody, who as we learn later, has a connection to Hannibal via one of his patients, who has killed, in a very specific way, a member of the Baltimore Philharmonic Orchestra and used his vocal chords to create music. That obviously ties into what Will is starting to experience, this disintegration of his own mind. It ties into the plot with Hannibal and we begin to see a bit more of what Hannibal is capable of. It’s also rather disturbing and brilliant.
POSTED BY Damian T. Gordon .....AT 8:16 AM