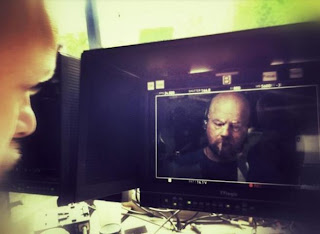 With that solid cast and high-caliber creative pedigree, the icing on the HANNIBAL cake is the presence of HARD CANDY and 30 DAYS OF NIGHT director David Slade, who directed the pilot as well as subsequent episodes and stayed on to maintain stylistic continuity (he’ll helm the season finale as well). Slade’s mark is most evident in just how dark and downbeat the show is, evidenced by a nightmarish score and sound design that is the most visceral and affecting on TV since Angelo Badalementi’s ambient work for TWIN PEAKS. FANGORIA was on set, and had the chance to briefly chat with Slade.

FANGORIA: Most of the world thinks of Anthony Hopkins as the face of Hannibal Lecter. Even Brian Cox in MANHUNTER has his fans. What do you think Mikkelsen adds to the Lecter legacy?

DAVID SLADE: A terrifying subtlety. And as the episodes go on, you will see this progress. He’s an astonishingly subtle performer with an incredibly keen sense of timing and what he has to do; he has a kind of mission in his acting. I can’t spoil it, but there is a moment in the third episode when the scene just becomes terrifying for reasons it shouldn’t, and that’s all Mads. He can be charming, and then turn on a dime slowly and scare the shit out of you. No one can do what Mads does, and I firmly believe he’ll end up being the definitive face of Hannibal Lecter.

FANGORIA: We know how much music and sound plays a part in your work. How much of the immersive audioscape in HANNIBAL is your doing?

DAVID SLADE I met with composer Brian Reitzel when I was doing 30 DAYS OF NIGHT. That movie was very similar in its tone in that there were no melodies, no big stings. It was psychological composing, and that’s what this is too. When I brought him in for this, we wanted to have pulses, and for you to hear the neurons pop. Brian took violin bows and scraped them against skulls, mixed in with electronic instruments. It’s not traditional scoring—he doesn’t do that—but what he’s done for HANNIBAL is fantastic. A lot of work went into this music, and it’s a very subjective sound.

FANGORIA: HANNIBAL is an incredibly dark show, and it’s very unusual for music and sound to be such a character on a network TV show.

DAVID SLADE You’re right; it is a character here. It’s very different from what’s happening on network television. We’re pretending it’s not television, in fact. It becomes tricky when you’re editing, of course, but this is why I’m on it all the time. It’s why I stayed with the show. See, the usual process with a TV pilot is that the producers hire a director, he works on the show, they kick him out and he gets a royalty check, maybe an executive-producer credit. Hell, most directors want this; they want to get in and get out. But here, I stayed on. They embraced my ideas and we created a look, and they’ve kept me on to maintain it.

Pick up a copy of FANGORIA #323, on sale next month, for an exclusive sit-down with Mikkelsen as well as some exclusive bloody photos. 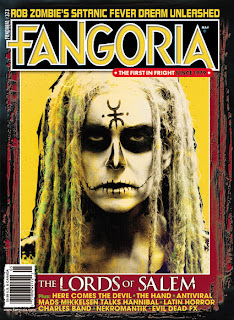