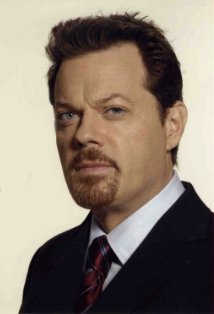 Eddie Izzard (wonderful actor, mad charity marathon runner and hopefully the future Mayor of London) is guesting in Hannibal as an inmate at the Baltimore State Hospital for the Criminally Insane (the same facility where Hannibal Lecter is eventually incarcerated). Izzard’s character is claiming to be “the infamous Chesapeake Ripper.”