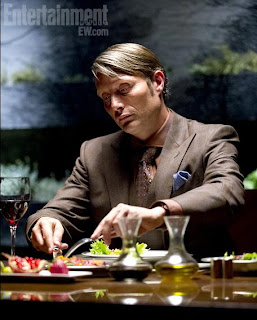 While in "A Royal Affair," Mikkelsen's plays a doomed hero; he's equally adept at playing villains. Enter Hannibal Lecter, the TV series. The NBC show is set in contemporary America. It takes place before the FBI arrests Lecter for his serial crimes. "That was a nice shift of gear for me," said Mikkelsen of being cast in an American TV series. "Like wow, why not stick with something for a long time and see how it goes?"

Certainly Anthony Hopkins, who won a Best Actor for playing Lecter in "The Silence of the Lambs," throws a big shadow over the character. "You can't avoid that," agreed Mikkelsen. "He made it iconic and for a good reason. He's absolutely outstanding in that character. We cannot move away totally from the fact that he is what he is, if not a little decadent then at least a man full of taste. But this takes place before he's captured. Before anyone knows what he is."

Mikkelsen offered a thumbnail of the plot, which is a prequel. "Lecter is hired to help Will Graham [Dancy], who is a genius FBI profiler. But unfortunately Will suffers from too much empathy. It means he cannot deal with the cases. He's putting himself in the shoes of the killers and he cannot handle that situation. So, the FBI hires me to help him deal with his job."

Big mistake, right? "Right," Mikkelsen continued, "I'm a psychiatrist. And all of a sudden I find myself in this candy store where I love being in the middle of every investigation that comes in. It means I can do pretty much what I want. I can manipulate the cases that Will's running. I can get away with anything."

Does this Lecter commit murders or just solve cases? "There's a lot of solving cases and I do eat stuff occasionally," Mikkelsen said. "A man's gotta eat."

http://movies.yahoo.com/blogs/the-reel-breakdown/mads-mikkelsen-talks-losing-head-royal-affair-following-221228251.html
POSTED BY Damian T. Gordon .....AT 7:04 AM