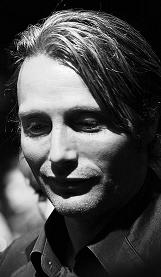 "Hannibal Lecter has his own morals. And he is extremely in tune with them. He is a master of empathy, but he's turned that into a weapon. So he is very interesting on many levels, because if you violate his moral code, he eats you."

"I tell you, I wasn't so sure about doing Hannibal. But two minutes after I was pitched, I asked the producer - 'Can you do that on TV?' - and his answer was yes. Those two minutes turned into two hours ..."

Hannibal is slated to air sometime in 2013, but Mikkelsen will be doing yet more rounds of press for A Royal Affair - which is currently on the festival circuit - as well as The Hunt, in addition to more feature work.

As long as there is something tough enough to chew on, Mikkelsen will be there. "The beauty of any interesting character, even the worst, is that they truly believe in what they are doing. Even Hitler thought he was right. That's why people are interesting to me. Everyone has their own moral bar."