Washingtonpost.com: The next role for José Andrés: culinary advisor for “Hannibal,” a future NBC series 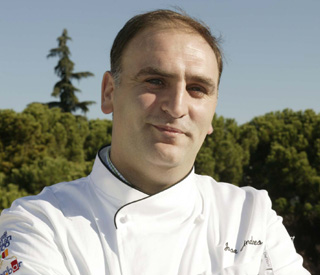 Add yet another line to the epic resume of celebrity chef José Andrés: culinary consultant for the forthcoming NBC series “Hannibal,” based on the fictional serial killer Hannibal Lecter.

You remember Lecter. He’s the mad man from “Silence of the Lambs” who professed a fondness for human liver “with some fava beans and a nice chianti [insert scary tongue noise here].”

Andrés says he was tapped by producer and screenwriter Bryan Fuller to flesh out the character, so to speak, by showing what a culinary sophisticate the cannibalistic psychiatrist was, pre-incarceration. There will be references to French chef Auguste Escoffier and fine wines, says the chef, and a scene featuring loin — but not pork or beef loin — with roasted apples and Cumberland sauce. Eventually, “every single body part” will factor into the show, says Andrés, who adds that his research included eating “a lot of lung dishes this summer.” (Lung, from animals, is popular in Italy and Spain.)

Putting in a plug for his native Spain, he says human bones found in the ancient Atapuerca caves in the north of the country show evidence of man eating man, perhaps in the belief that the consumer might absorb the conquered party’s power — but possibly also just because he could.)

Andres was eager to accept the assignment from Fuller, who won an Emmy Award for his work on “Pushing Daisies.” “This is beyond cannibalism,” says the chef. “It’s about people who have dark sides and dark stories.”  His restaurant team had initial doubts about the project. “This is TV!” he told them. “I’m going to lose customers doing this? I don’t think so.”

Andres hesitates to share too much about his work on the series, which has not been given an air date yet. Some of his ideas might end up on the cutting room floor, he explains. But the chef suggests viewers watch for a party scene with food prepared by Lecter and also an “interesting” new way to prepare a Fuller favorite, mushrooms.

“I want Hannibal to have the same passion as Jose Andres has,” says Fuller, the creator of the 13 episode show, which is currently shooting in Toronto and stars Mads Mikkelsen as the cannibalistic psychiatrist before prison. (His advice to the actor: “Do not read any serial killer books. Look at cookbooks.”)

While the series will show Hannibal “at his most peacock and expansive,” Fuller says, the character will be seen cooking, rather than sourcing his main ingredients, to “make him more relatable and less a villain.”

Lecter is no garden variety flesh eater, says Fuller. The character thinks
of his victims like this: “You are a pig of a human being and you deserve
to become someone’s bacon.”